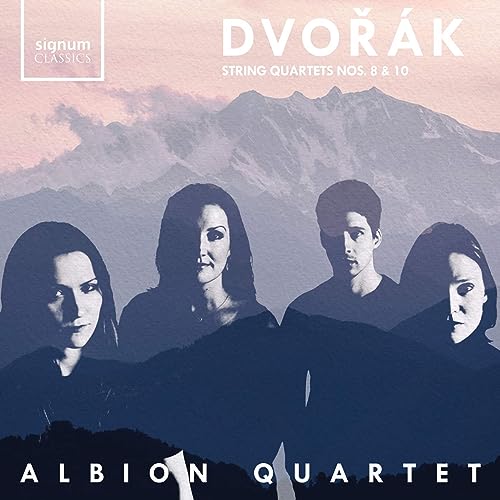 What a gorgeous disc! True, it’d be a poor sort of string quartet who couldn’t make your heart melt with the opening phrases of Dvorák’s Op 51 String Quartet. But I’ve rarely felt such a glow of love from the less familiar E major Quartet, Op 80, the opening piece on this second disc in (let’s hope) a series devoted to Dvorák from this young British ensemble.

I’m not sure if there’s such a thing as a distinctively Czech style of quartet- playing (when I interviewed the Pavel Haas Quartet last year, they emphatically denied it). But anyone who thinks that the new generation of super-quartets are merely about virtuoso brilliance should hear the myriad shades of russet and gold that the Albion Quartet find in these two enchanting works. This, surely, is how Dvorák’s chamber music is supposed to sound: luminous, playful (there’s a
real kick to his dotted dance-rhythms), and simultaneously generous and touchingly intimate.

But the Albions engage head as well as heart, finding exactly the right scale for the climaxes in Op 80’s slow movement and moving brilliantly, buoyantly as one in the exuberant skočná that closes Op 51. Some tempos can feel a little breathless but the Albions’ obvious love for this music is never laboured: I liked the way leader Tamsin Waley-Cohen applies the lightest of portamentos to the third movement of Op 80 – nothing blatant, but enough to make the melody flow.

But in the big tuttis (such as in the fast sections of Op 51’s dumka second movement) there’s still a satisfying crunch of rosin on string, though it’s never hectoring or crude – just (like the whole disc) sweetly and unaffectedly musical. I know it’s early, but I can already see this being my pick of the year.